RETIRED FROM OUR POSITION, BUT NOT OUR PROFESSION!

You may be retired from your career in education, but we know that many of you are still living the good fight for public schools.

Public education and educators face challenges that require the resolve and support of its members -- all of its members, both active and retired. NEA needs your support, your wisdom, and your leadership to forge a path forward. Joining Missouri NEA-Retired gives you the opportunity to remain engaged on important issues facing students, education, and educators.

If you would like to talk to someone about membership, Olivia Compton would be happy to assist you. Please contact Olivia at (417) 569-1402 or by email at olivia.compton@mnea.org.

Run for MNEA-Retired officer or delegate

Now is the time to declare your candidacy for the MNEA-Retired election. MNEA-Retired members will elect officers and delegates to the NEA-Retired Meeting, NEA RA, and MNEA RA during an online election taking place April 14-20. 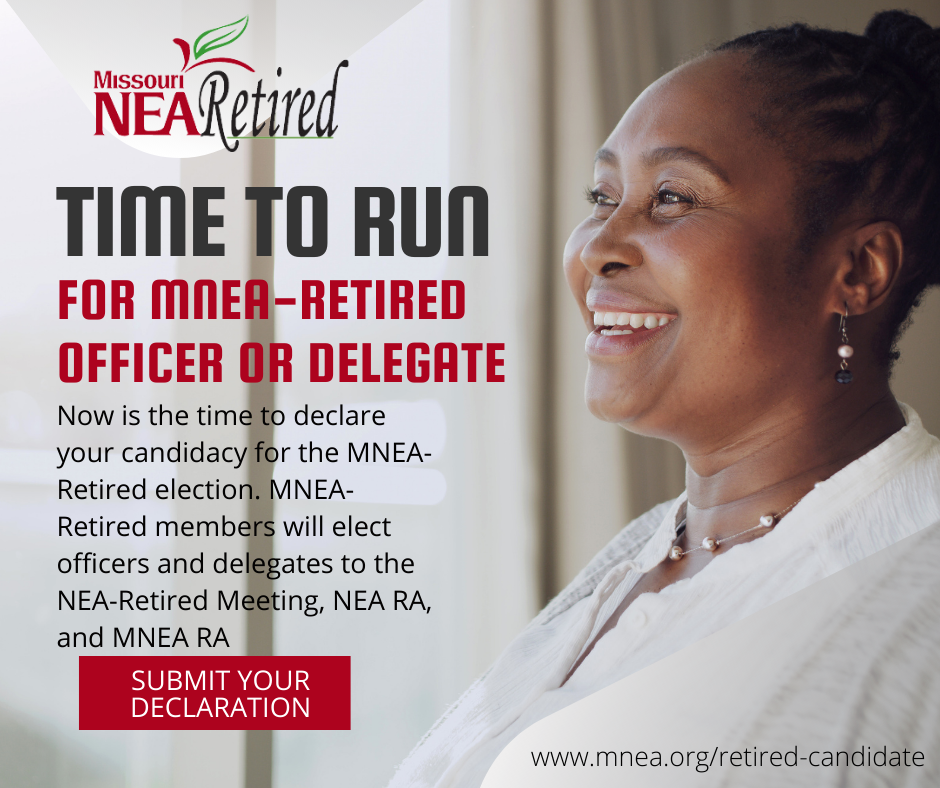 Join the Organization Working for You 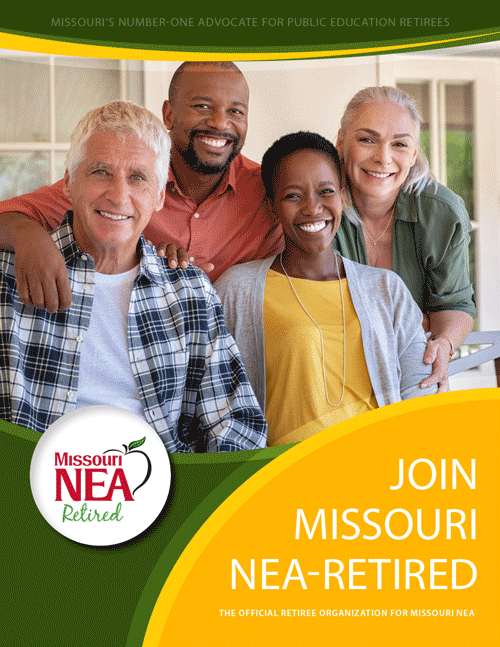 Don't wait until you retire to join.

You can join pre-retired at any time, even while you are still receiving a paycheck from your school district. In essence, you can "pre-pay" for your MNEA Lifetime Retired membership, and it will just roll over when you notify us that you have retired.

For a one-time lifetime subscription fee of $500 or $75 annually, MNEA-Retired membership provides:

To know more about the duties of officers, dues, and delegates, reference the MNEA-Retired Bylaws.

As a member of MNEA-Retired, there are a variety of publications and mailing lists that you may be interested in, all of which are free to members. 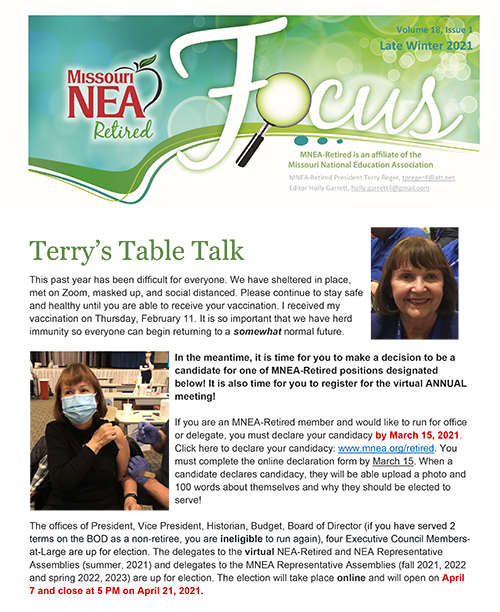 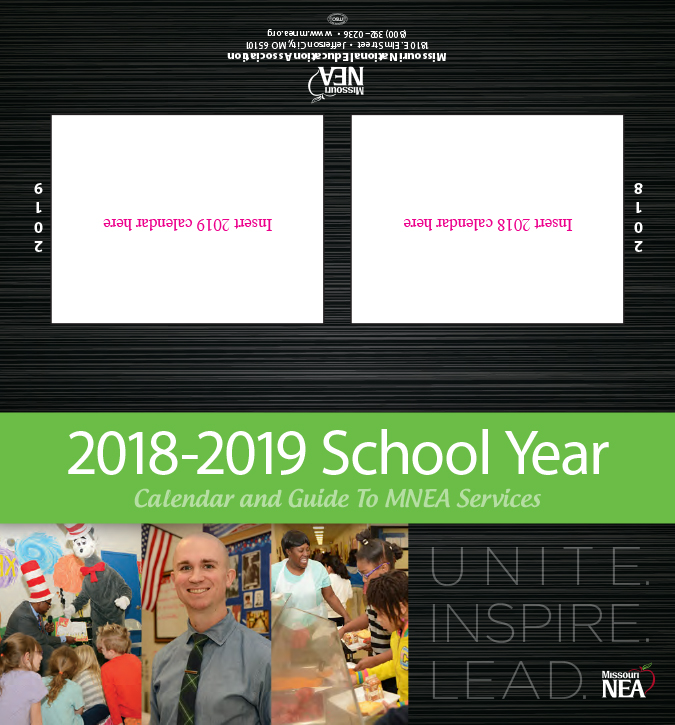 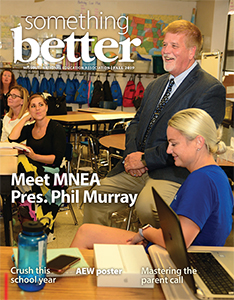 The MNEA-R Executive Council, elected at the annual meeting, plans the programs for MNEA-R and is the liaison between MNEA and NEA.

Linda Innes currently represents MNEA-R members on the MNEA Board of Directors.

Please check the NEA-Retired page for the national leadership, including the executive officers and board of directors.

Missouri NEA Retired is offering a series of virtual trainings. There is no cost for the trainings. Click on each session to watch.

Voting during a Pandemic
Watch Now >
Passcode: *9i3kscr
Presenters: Liz Zerr and Mark Jones
MNEA Plans to Get Out The Vote. Learn about the different options and processes for voting in the midst of COVID-19. We will cover important dates, the differences between mail-in and absentee ballots and other voting options. Learn tips and techniques to mobilize others to vote.

Ben Franklin: Printer, Scientist, Diplomat
Watch Now >
Passcode: !4$Jd%#K
Presenter: Bill Stewart
Perhaps our best-known founding father, Franklin is a fascinating figure from our nation's birth. This presentation will begin by discussing Franklin's early life, as well as his work as a printer in colonial Philadelphia. We will then take a look at his considerable scientific contributions and finally his indispensable work in creating the United States of America from a collection of diverse colonies.

NEA Member Benefits
Watch Now >
Passcode: SLS4R0@!
Presenter: Darby Boyd
Learn how to maneuver the NEAMB.com website. Review the various benefits that are available to you from insurance to travel discounts.

Caring Help for Education Endeavors by Retirees was formed by MNEA-Retired to be a public benefit by enhancing the learning conditions of Missouri's children. CHEER provides opportunities for MNEA-Retired members to reach out to public school district employees, particularly early career educators, and provide financial and material resources such as, but not limited to the following:

CHEER Fund Request application must be received by Feb. 1 each year. The MNEA-Retired President or designee(s) will review applications before funds are awarded. If applications are approved, applicants and sponsors will be notified around March 15 and funds will be awarded soon after.

Apply for a Grant 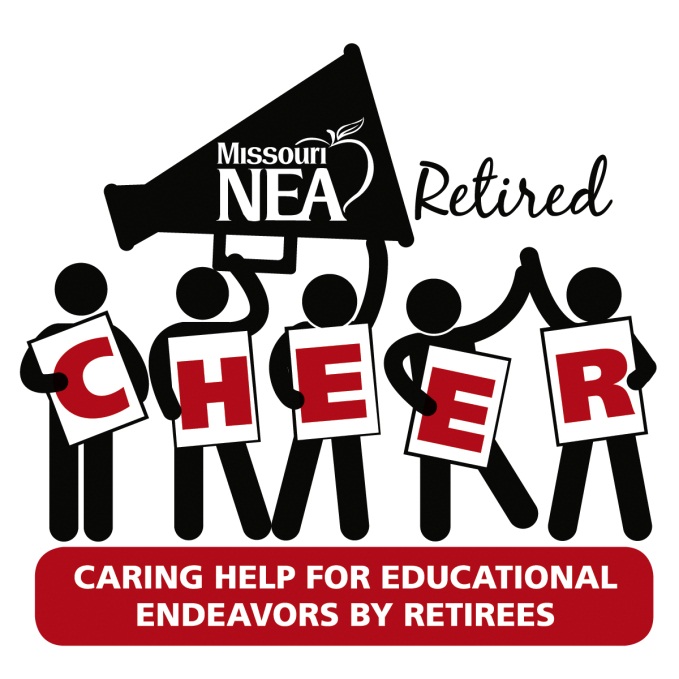 Contributions to the CHEER Fund are tax-deductible as a charitable contribution. You can choose to contribute by mailing in a check or online using your debit or credit card. Through the online donation form, you have the option of limiting your contribution to a one-time donation or recurring donation.

MNEA-R is proud of its legacy and members who continue to prove that MNEA-Retired is “Something Better” for retired educators of Missouri. In April 2022, MNEA-Retired gathered to commemorate 35 years with the theme "Celebrating Our Past. Focused on Our Future."

Download the slide show to view pictures and stories from the last 35 years. 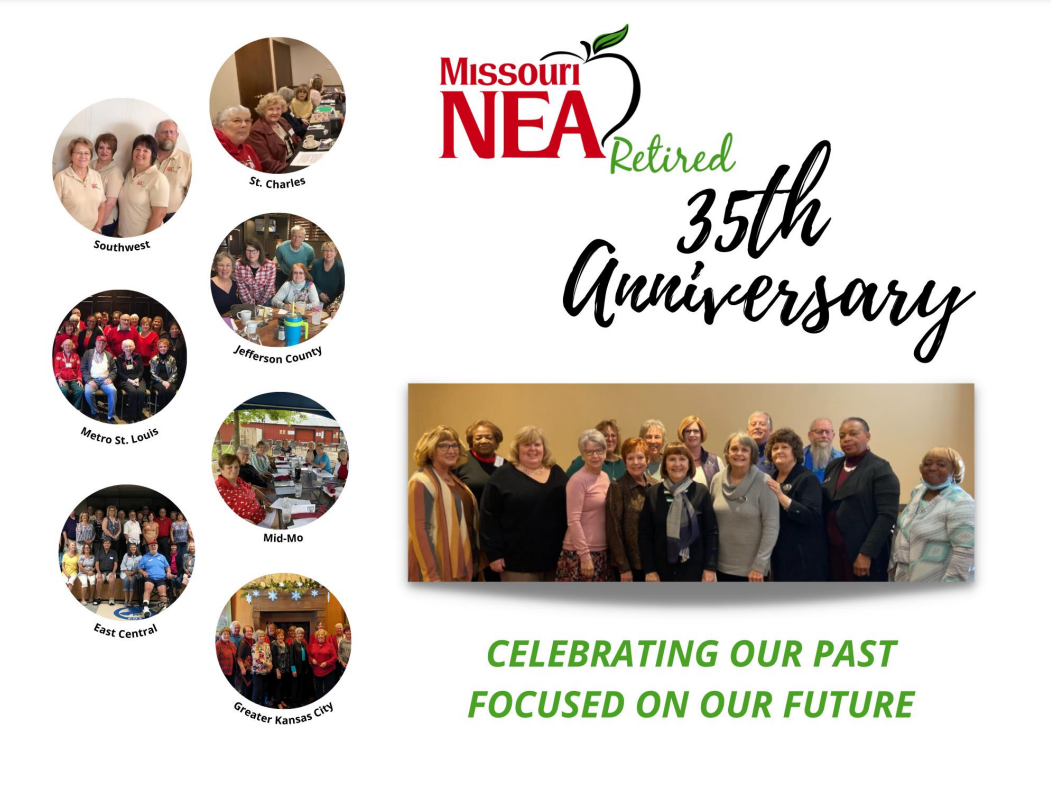