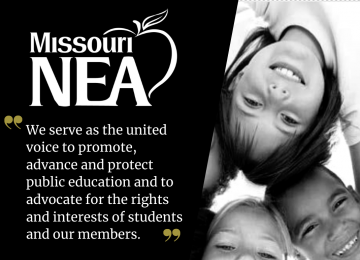 "To serve as the united voice to promote, advance, and protect public education and to advocate for the rights and interests of students and our members."

"To keep the promise of a quality public education through a great public school for every child."

...A new day has arrived for Missouri teachers. From all areas of the state, we are declaring our independence from our old futility, from groups dominated by people who did not believe in the collective insistence of teachers on better schools, better salaries and better protection of teacher rights.

Download the 45th Anniversary brochure for a timeline of special milestones, a list of founding members and charter locals, as well as a list of state officers since 1973.