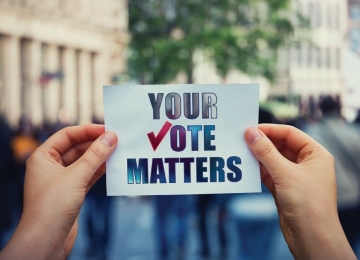 MNEA members are Democrats, Republicans, and Independents. The issues that unite them are protecting children and improving public education. These are the issues that drive MNEA’s and NEA’s candidate-recommendation process.

How you vote is a personal decision; however, Missouri NEA leaders hope that, as you review the issues and positions of candidates, you will consider the recommendations made by MNEA-PAC.

To report candidates recommended by your local association, please send the name of the school district and recommendations to MNEA Political Director Elizabeth Zerr by submitting the Candidate Recommendation Form.

Missouri NEA local associations abide by a recommendation process that evaluates candidates based on their values, not party affiliation. They recommend candidates whose values closely align with MNEA's beliefs and legislative platform, which include protecting the rights of students and education employees; ensuring every student has a qualified, caring teacher; and investing in public education so teachers have the tools they need to help drive student success.

These pro-public education candidates have been interviewed by a committee that lives in your school district and knows the issues that are unique to your community.

Please check back as we get closer to the next school board election taking place on Tues., April 5, 2022. If you have questions, contact MNEA Political Director Elizabeth Zerr (elizabeth.zerr@mnea.org, (573) 644-9610).

All viable candidates are given the opportunity to respond to a questionnaire and be interviewed by a local committee of MNEA members for possible recommendations to the MNEA membership. There is one exception: incumbents who have maintained an excellent record of support for children and public education issues are given early support.

Candidate questionnaires are designed to measure the candidates' commitment to children and education on the following issues:

An elected officeholder who has a record of support for children and public education is given special consideration. These officeholders have worked with the Association to pass the Association's legislative agenda.  Giving them an early recommendation of support sends a message to them, to other legislators, and to MNEA members that they are supporters of children and public education.

Opponents of the incumbent recommended for early support are not sent a questionnaire or interviewed unless the local screening committee does not concur with the MNEA-PAC recommendation.

A non-incumbent candidate could receive an early recommendation by a 2/3 vote of the MNEA-PAC Executive Council.

Recommendation decisions are based on written questionnaires, candidate interviews, and an assessment of candidates' campaign plans and winnability.

The recommendation process requires the commitment of MNEA members to carefully examine the candidates for public office to assess their commitment to children and public education.

What can you do?